“Fox News will one day come to an end. Led Zeppelin will not. It’s as simple as that.” -Henry Rollins

Like many kids born in the 70s, I owned a record player, and like many girls, I would host dance-a-thons with my girlfriends so that we’d have an excuse to lock ourselves in my bedroom that was wallpapered with Duran Duran images, and sing all the lyrics together. When I say wall-papered, I mean that I took the time to cut out the pictures from the music magazines, and scotch tape them together from one end of my wall to the other. We. Were. Crazed. It’s not like I listened to one album one time, and moved on. I listened to Duran Duran over and over and over…..for a really long time. Later, I realized I was just like all those screaming girls on television who cry and moan at the site of their favorite boy band, except that I never got to the live version. I never got to design my large poster with hearts on it, professing my love for John Taylor. Instead, I just dreamed of it often. No worries though, I continue to make up for that miss. That one, I’m way surpassing. Another huge miss would be that I was born too late to see Led Zeppelin in their prime. I’m not sure I can ever make up for that one, but I am going to die trying.

I am no musician. I use to play saxophone, and I managed to play it for a long time, but I’m not sure my skills were ever considered musician-like. I read music, but couldn’t create it. I was school taught, and with practice, I could rip a song decent enough to win awards, and hold first chair for several years, especially for a girl in a jazz band. Even so, my talent was limited to whomever was directing me. I had a hard time with anything outside wood instruments, and while I was also a decent member of a singing group in high school that I took very seriously, there was always someone standing next to me that was 10x better, but to this day, I wish I would sing more often. Don’t get me wrong, band saved me in high school. Period. I’m sure that if I hadn’t been in band, I would have been into something else, and it wouldn’t have been good.

In spite of these short comings with talent, my exposure to music made me a worshiper of music. While in high school, I use to go to these live shows at a club in Atlanta called The Cotton Club, among others. Lucky for me, they would let underage kids into these clubs back then. My friends and I would try to find a lot of off beat live shows around the state, attend festivals, and simply hunt down the opportunities. That habit primed me for living in Athens, Georgia, where I would say live music became my religion. It was there that I learned Athens was Austin’s sister, and while attending college there, I would meet people coming and going from Austin for years. It took me until 2014 to finally see Austin.

This year, I made it to the Austin City Limits Music Festival! Not only did I get to see Spoon’s live recording at the ACL Television studio (thanks to Matt Mandrella out of Austin) that is impossible to get into, but I also got to see some other favs like Lucius, Interpol, Benjamin Booker, Beck, Millsap….the list goes on. It was glorious, and while I feared I wouldn’t be able to swing an all day/all night music festival experience that stretched over several days like I did back in the day, I was completely wrong. I did quite well, and wanted more and more. It gave me hope that I could be that old woman, rockin it in the front row with all of the 20 year olds in the near future.

In Anchorage where I live now, there is this older married couple that is at almost every live show I’m at. They are your typical old school dead heads. The wife has this shiny white hair that goes to the middle of her back, and when she dances, you want to be her. Her husband Mark has his own moves too; always grinning, he manages to get to the front row every time. When you see him dancing, leaning into his wife, again, you want to be her. You want to be them in the moment of the music. I imagine that their live music playlist is outstanding.

I don’t have a husband. I don’t have shiny white hair-yet, but I hope I keep my hair long when I’m older. I hope I stay until past the curfew that is designated for old people. I hope I dance and dance. I hope that my passion for live music lives on.

Thanks Austin, Matt Mandrella, and Erin Baca for a trip of a lifetime. I’ll never forget it. 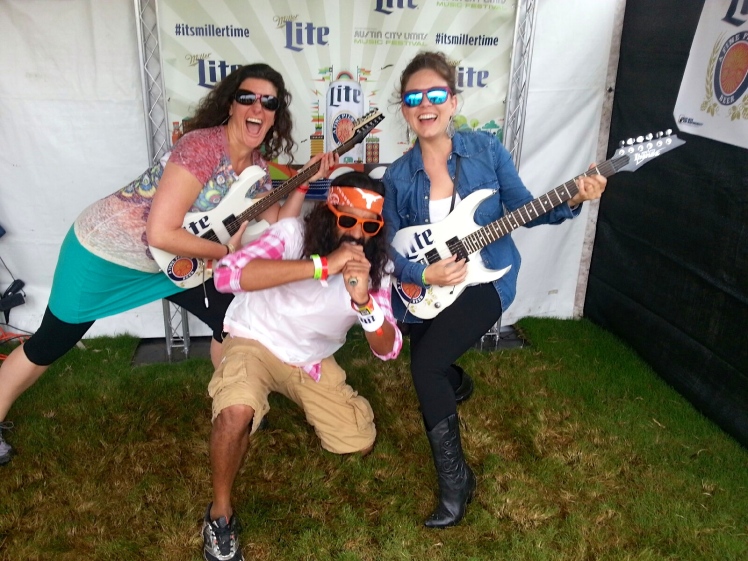 One thought on “To Austin, with LOVE”