My favorite time to visit Talkeetna is during the winter-it’s the locals, and those just a hop, skip, and a jump from being local in the cold months! But,  summertime in Talkeetna is pretty sweet too! If you are coming up to Alaska, and are seeking some small town vibes, this little spot off the Parks Highway on your way to Denali National Park is a great pit stop. One of my favorite things about Alaska is that it has several small towns, all of which carry their own personalities and special offerings. Drive touring Alaska takes a lot of time so it’s wise to take advantage of the little gems along the way.

Talkeetna is a hippie-town nestled at the end of a 14-mile spur Rd. off the Parks Highway, which is about a 2 hour drive north of Anchorage. It can take longer, depending on summer road construction. Known as the nearby rest spot for mountaineers, it carries a huge history surrounding Mt. McKinley (Denali) climbing teams. Some argue that it has more consistent and better views of the Great One over actually driving to the National Park, but I’d say it just depends on the tricky Alaskan weather. Even so, people flock there for a chance at the viewings.

Here, I’ve given you some of my favorite things for being and doing in Talkeetna in the summer!

Ways to catch the Range

When driving into town, there are a couple of major lookouts, the best one being around mile 13 on your left. When the range is out, it screams from this spot. When you get into town, taking a left, and following that until it dead ends near the camping area will bring you to the trail head for the Susitna River. If you walk down that trail, it dead ends onto the river bank and this is a prime spot for viewing the mountain range! On a sunny day, you can catch the entire range. For those that don’t know, the popular section of the range is Mt. Foraker, Mt. Hunter, and Mt. McKinley, in that order from left to right. The day I went to the river, the range was clouded over, but in this shot from up above, I was able to catch a glimpse. Recently, Talkeetna has opened up a zip line, where you can see the range as well, but I have not tried it. I’ve heard it costs $150.00, and takes 3 hours, but if that is your sort of thing, I’ve also heard it’s worth it. In addition, Talkeetna offers several flight-seeing tours, where you can even land on a glacier!

I’m way into biking so if it’s you’re thing, you should check out the many opportunities Talkeetna has to offer. I can’t attest to the bike rental companies as I own my own bike, but if you can’t bring one, it’s worth researching. Biking in Talkeetna along the spur road itself is pretty amazing, but there are also several trails as well as pretty vacant side roads to take. If you are into road biking, there are miles and miles of safe roads to explore; if you are into trail biking, check out the XY Lakes trail system, which also connects to the ski trail system.

Talkeetna’s famous Roadhouse is for sure worth a breakfast stop-simple, country-style cookin’. During the summer, the Wildflower Cafe’ is one of the best spots on Main St. for dinner. If you are into beer, recently opened Denali Brewery offers a great array of delights on its menu, including reindeer meatloaf, not to mention amazing brews. Along Main St., there is also the famous Spinach Bread truck food trailer, which is for sure worth checking out. Main St. also offers ice cream in the general store, bar grub that helps any hangover, and the infamous Fairview Inn, where booze and beer is served into the wee hours of the night. I’ve been to countless concerts in my life, but I can honestly say that some of the roudiest foot-stomping has taken place at the one and only Fairview.

Many locals in Talkeetna are huge water rats-they are into floating, rafting, canoeing, etc. With the lake system and river system right off the roads, it’s no wonder; Talkeetna offers easy access to some of the best water systems in the state. For canoeing, you have several options, the best being the XY Lakes system. For rafting, the Talkeetna River merges with the Chulitna and Susitna Rivers. The Susitna is a prized possession among the locals and currently, they are fighting a political battle to avoid a dam being put in the Susitna. It seems like Alaska is on fire with political controversy, all over natural resources, and the preservation of such. My experience with water sports, in general, is lower than I want it to be, but my canoe has been in the water there a few times and I just had a great float from the Talkeetna to the Susitna. 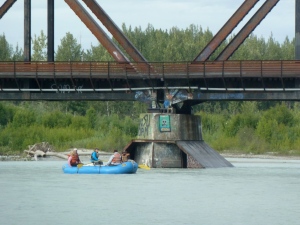 I’ve come to love the little gems of Alaska more and more. Maybe it’s because I’m searching for the alternative of what I have now. Maybe it’s because I’ve lived here long enough to realize that those places are what matter. Maybe it’s just because in the deep pits of my soul I will always be a small town girl. In the end, I still have lots to explore in my favorite state!

And for all of us Alaskans, the best part about this wacky summer is that we have lots left. Fireweed grows all over the state and it is the plant that indicates how we are doing with the weather because as summer passes, its blooms grow up the stalk. This year, as seen in this photo, even though it’s July 14th, we still have quite a bit of summer left. Yahoo!

For further details about events, accommodations, and more in Talkeetna, their Chamber of Commerce is an excellent resource.

You can also check out my previous posts about Talkeetna in the winter:

Oosik Classic Ski Race-Say What!? Talkeetna is One of a Kind

Buckets, Balls, and A Bachelor Auction in Talkeetna, Alaska

2 thoughts on “Grabbing some summer in Talkeetna, Alaska”