There’s something about an event that brings your gender together for a cause, with zero distractions from the other team. When I get my girl time and I do get enough of it, I’m always appreciative, but it doesn’t always bring our energy forward and I’m not sure my guyfriends need that like I sometimes need it. Maybe it’s because they capture it easier than we do, I’m not sure. Their version of it might be that fishing or camping trip where’s it’s just them and nature. Maybe they gain it while watching football, yelling together on the couch, with a bag of potato chips and beer. That might be enough. For me, those moments when it’s just me and my girlfriends can be enough, but I’m reminded that sometimes, I need more.

An event such as The Ski for Women does just that; it’s a fundraiser to support anti-domestic violence resources and it has several races that 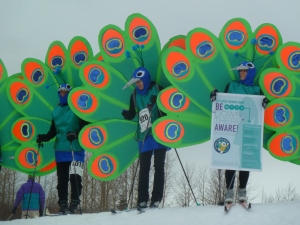 also includes a Party Wave, where teams “ski” in costume. One group in particular is known for making the paper and the news, and in fact, this year, they made the paper ahead of time. They were peacocks this year, and last year, they were giraffes. It occurs on Super Bowl Sunday every year because that supposedly is the most domestically violent day in our nation.

This was my 4th year participating in the event, but my first time being a part of a larger group, the Puffin Team! We had something around 17 people dressed as puffins. Many of us did the timed event, but we also paraded around with the rest of the costume teams.

I loved being around all of the strong women in the crowd. We had great snow conditions, weather, and participation. The best part for me was seeing young girls dressed up for participation, and so excited about the costumes, and on the other end of the spectrum, elders doing just the same. This event brings all ages of women together and while I still remain in the middle, so to speak, I love examining the entire spectrum of power that women have together. On all levels, we have so much to give.

Learn with us. Lead with us.