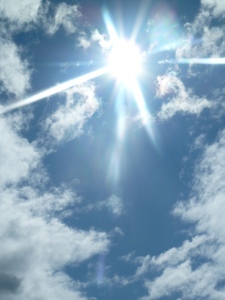 In Alaska, fishing as a dipnetter from the shore requires some intense gear, the most important item being your full-body bibs that come with booties attached-you get warmth and the added bonus of no water leaking in from your water shoes. Not only are you fishing in the mud and water, Alaskan summers can be darn cold. The other thing that is essential is that you have an easy-access chest pocket on your bibs. This can carry many things, but the most important item is a can of swill beer-nothing fancy, something along the lines of PBR. Why would you need that you ask? For the waiting.

That’s right-the waiting. Once you are geared up, you are ready to get your dip net out-this is a net attached to a very long pole, and the good ones have a handle on the end of them so that you can hold it stable in the water. From the shore, you essentially walk out into the water, and join the line of other dipnetters. You stick your dip net just below the water so that you can’t see it, allowing your net to flow in the right direction to catch the fish. It’s not your rocket science kind of fishing; all you need to know are the tide tables, and you’re ready to catch some fish. While you’re waiting for the fish, you are talking with the other dipnetters, and having a beer while in the water. It’s a beautiful combination to entertain yourself when the runs are slow. Of course, our purpose is to be catching some fish. If you are lucky, drinking your beer isn’t an option because the fish are pouring in and you’re going from the water to the shore every five minutes, catching and bonking.

On this particular fishing day, we arrived to the Kasilof River dipnetting-combat-fishing extravaganza late. We were the last group to get someone in the water for this particular tide. I approached the end of the line, braced my net, and popped open my beer. Being the only woman at the time, I got some nods, some kind words-your basic boy banter, but everyone looked bored and impatient so I knew the catch wasn’t going great. When I asked the men near me, they proceeded to give me the statistical rundown of previous tides, but not one person had caught a fish on this tide yet. Not one! I patiently listened to their whining chatter that eventually died down to a dark silence.

I might have been in the water maybe 10 minutes when I felt a fish enter my net. Almost the entire line turned their heads in my direction very slowly, giving me stern looks. I quickly flipped my net, smiled at them, and turned around to walk through the muddy grounds back to my group.

I yelled at my friend Roxy, “I got one!” She was barely even ready as she was still setting up our prep station.

“Woohoo!” she screamed, jumping up and down. 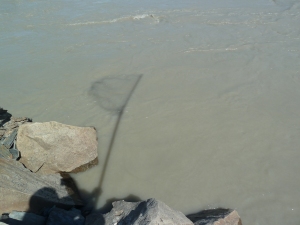 The end. The rest of the shift was dead. No one else caught a fish and that was the only fish we caught the entire time we were there. Once we tired of standing in the dead water, we decided to grill up our one and only right there. Why not? It wasn’t like we were taking anything home. When you eat a fresh sockeye salmon, grilled to perfection over a wood fire, it is always the best meal of your life, like the first time you ever tried it. It doesn’t matter what kind of day you’ve had or how hard you had to work for that fish. It’s like when you do a 12 mile backpacking day-whatever you eat for dinner is this amazing culinary delight, even if it’s lentils out of a can. This one was no exception.

There was only one problem with this fish though: he gave me a bone. A bone? Yes, a bone was stuck in the back of my throat.

I’m usually not much of a whiner when I have pain. In general, I’m pretty stubborn when it comes to doctors and prescriptions and anything related to the health industry that I don’t trust so I’ll put off facing reality at all costs. Even when I was hit by a car on my bike, I refused to go to the hospital that night, only to wake up paralyzed. I couldn’t move, and had to have a friend help me get to the hospital. So, stupidity plays a role with this issue in my life.

Though at first, the bone wasn’t bothering me that much, I began to ask for common remedies, casually, so that I could try them out. Drink milk. Swallow slowly. Eat crackers or bread. I tried everything I could to help get that salmon bone out of my throat. After about 24 hours, I began examining my throat in the mirror, but all I saw was this swollen, red puffiness.

By this point, I’m in a lot of pain, but I actually had to get on a plane to go to Las Vegas. Yes, Las Vegas. Now, in the pit of my soul, I believe that Las Vegas is the armpit of the United States, but this was a point in my family life when my brother was a professional poker player and every summer, he competed in the World Series of Poker. He began that career online, and it expanded to a publishing company, which still exists today. In those days though, he would rent a house and relocate for a bit, just to play live poker games and network for his business. This resulted in family reunions in that hot mess. So, back to the plane. I was going to have to fly the very next day and I had already dealt with the bone for two days with no luck, but at this point, I didn’t have time to go to the doctor so I just decided to suffer through the travel, and figure things out when I landed.

For the plane, I brought a pair of tweezers, and began taking trips to the bathroom to see if I could avoid gagging myself long enough to remove it, or at least grab it. The first trip to the bathroom, I looked at my throat, and the bone’s energy had now spread, but I could see it now. The reason I could see it was because circling it, there was a white ring followed by some nasty, yellow puss followed by several large, inflamed red circles. My throat was on fire. No luck though-I couldn’t grab it because I would gag immediately when going back so far.

At the Las Vegas airport, dad picks me up, and when we get back to the house, I begin to tell the story to my family and they are looking at me like I’m an idiot. I needed to go to a clinic or something, immediately. It isn’t like the apple doesn’t fall far from the tree, but I knew they were right. Calling around, I learned that I couldn’t go to the clinic for something so weird and it was suggested to me that I visit the emergency room. The emergency room!?

Physician Assistant, “What seems to be the issue?”

“I have a salmon bone stuck in my throat.”

He pulls a chair over that has a long mirror attached to it so that I can see my throat and when I open my mouth, he winces, and turns the other way.

Looking at me like I’m a complete idiot, “How long has the bone been in there?”

“We are going on the 4th day. I was trying to fix it myself.”

Laughing, “How’s that working for you? It looks completely infected. Let me go talk to some folks and I’ll be right back.”

He returns in his one hand with this very large aerosol-type can that has a plastic tube sticking out of the opening. In the other hand, he has the largest pair of tweezers that I have ever seen; they looked like cooking tongs, but super skinny. Internally, my reaction was one of absolute fear. My comfort level was around how you feel during your first gynecological exam, when they put you on the table with the stirrups, make you spread wide open, not for pleasure, and bring out that awful looking tool that was invented to clamp open your vagina so that the doctor can swipe your cervix. Awesome.

“So, I’ve never used this stuff before, but basically, it is going to prevent your gag reflex and then I’m going to try to pluck the bone out of your throat with these tweezers. I’ll spray a direct shot of this onto the back of your throat, but you should know it isn’t going to taste good. Once I do that, I’ll need you to hold still so that I can try to grab it on the first try. Ready?”

He gives me an awkward smile, suggesting that he too hopes it will work.

He shoots the stuff right on target and although I’m squinting from the chemical-based product, I maintained my composure. In come the huge tweezers. I feel a quick purge of pain as he snags the bone out of my throat.

Immediate relief sweeps all over my body.

He holds up the tweezers and I open my eyes to look at my abuser and it was less than the width of my pinky finger. I’m stunned by the tine size of the bone.

“You were awesome on the first round, I can’t believe it. And yes, yes I paid. You have no idea how much.”

A couple of weeks later, I got my bill for that visit: $350 for probably 5 minutes of his time, which didn’t include the antibiotics that I was forced to buy. All in all, that fish cost me something around 500, when you add in gas, food, and remedies.

After going a bit cross-eyed over the bill, I smiled at the memory of all of us sitting around and enjoying that fresh-cooked stinker on the Kasilof beach. If only the smug-looking folks looking over at us with jealousy knew.

Learn with us. Lead with us.