Usually when I travel, I tend to go for the alternate option to avoid the traps and the crowds. You know, Frost´s famous suggestion of taking the road less travelled. It´s overused, but there is a reason for that. I´ll admit though that I regularly participate in other forms of chaos, such as combat fishing in Alaska, but I do that because you don´t really have a choice. You want fish. Everyone else wants fish too. The fish come on certain days. Period. Welcome to combat fishing in Alaska. I will also admit that I´ll go into any joint for a beer-where the locals hang, where the tourists hang-I´ve even shared one with a bum on one occasion; that doesn´t really matter to me because I get to have beer, one of my favorite things on this planet.

But for travel, there are many ways to be creative, alternative, and even hide. You just have to try harder.

That is of course, if you want to go to Macchu Picchu during the high season. Granted, I researched the road less traveled-the alternate Inca trail, but there were too many speed bumps that could have ruined our journey and I wasn´t going to take that risk. I knew that this was my one chance to see Macchu Picchu and I wanted it to happen without illness, surrender, and/or possibly having to endure annoying tourists on a five day backp 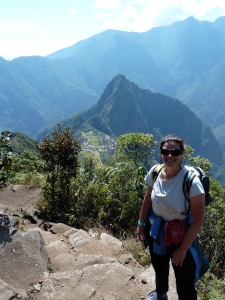 acking trip that costs $550.00. I´m sure we would have had an awesome guide….then again, maybe not. My mind pondered all of these variables plus more, and ultimately, I couldn´t put down the cash against all of those risks. So, I geared up for combat style. In one day. I researched. I bought train tickets, blah, blah. There is another huge story behind the ticket situation, but I´m going to pass on that for now. Let´s just say that I was given many different answers for how to make the date happen.

As you know, the Inca people were damn smart. Macchu Picchu isn´t an easy place to get to: a 20 minute taxi to the train, a 3.5 hour train ride to Aguas Calientes, a small tourist town that still has some personality, and another 20 minute bus ride gets you to the entrance. And this is with modern technology. Having said that, transportation in a foreign country is where a lot of learning happens. The amount of culture on a bus ride alone would make a great novel! Our day began at 5 a.m., and didn´t end until 9 p.m. Pachamama, Mother Earth, cooperated the entire day and the outcome was magnificent.

Have you ever been to a place that blows your mind? You can´t even really describe it to others because there is nothing that will replace the experience they will have when they go. In fact, it would be insulting to even try. Yes, I´m going to post pictures and my close friends and family that haven´t been there (I think I only have two friends that have gone) will “like” them, comment on them, express jealousy, etc., but that just isn´t enough. Macchu Picchu is like that; my experience is for me and me only, and what I gained from it can´t replace what someone else might gain from it. Many people state that you learn best through your own experiences-duh. You could argue that this is true for any place you go, or anything you do, but for me, when I listen to someone tell me a story about a place they´ve been to or an event they´ve enjoyed, I can get something out of them simply telling me the story. Maybe I won´t ever go there or attend that, but because I´ve listened or learned through someone else that has, that´s good enough. Sometimes. Sometimes, storytelling rules. And when we can´t or aren´t traveling or not hearing stories from others, we read. This is why some of us love reading, no? To live and learn through other peoples´ stories, lives, experiences, etc. I say all of this because I´m not going to tell you about my entire day at Macchu Picchu because really, what you want is to go there. Or if you ask me, you should want to go to Macchu Picchu and experience it for yourself. This is why combat tourism exists, and for once, my date with it is irreplaceable. I don´t regret it at all.

In fact, me being there with all of those people brought me back to the days when I attended church, back when it was required of me. We all showed up to the same building, in the same type of clothes to listen to the same lecture at the same time. Combat religion. Of course, Macchu Picchu had a different spin, but my point is that being with that amount of people in that majestic place was some form of spirituality because we were all looking for the same thing: understanding. With church, that date was usually a struggle for me. The fact that the Incas were swallowed by the Spanish, in the interest of Catholicism (the religion of my childhood) just added more to my experience.

So, this leads me to two highlights, outside of the transportation of course: Intihuatana translated in Quechua as ¨the hitching post of the sun” and The Temple of the Sun. I like how the Incas used the celestial system for worship,  and  how they managed to maintain a bit of that with the blend of the Spanish genocide. And regardless of what other people label it, for me, it was just that-a genocide. In any case, there are many sections to the ruins dedicated to their worship, especially to the sun. The first has a stone monument that was used as part of a ritual ceremony to bring about the permanence of the sun and this took place on the winter solstice. The stone marks a spot where the sun beam moves over, and then it hits a flat rock at a certain time of day. At another location, there is the Temple of the Sun that contains two windows, one for the winter solstice and one for the summer solstice. The Incas did everything they could to bring the sun´s cycle close to their daily rituals, as part of their celestial worship and beliefs.

As I was learning about all of this, it took me back to my current home, Alaska, which I can´t ever seem to get enough of, even though it´s been almost 15 years since I moved there. When I am not there, no matter where I am, I miss it; I get as giddy as a child when the plane hits the tarmac in Anchorage. I don´t know if I´ll be there forever, but I can´t imagine leaving it for now. It´s a pleasure to be able to go to a jaw-dropping place such as Macchu Picchu, and actually receive validation for where I have chosen to settle, to worship so to speak in my own way, to hold my celebrations with my people. Because you see, the people of Alaska also celebrate the summer solstice. It it is one of my favorite times of the year because it brings out all of the joy in Alaskans while also giving that area a ceremonial personality and I don´t know if that can be compared to other states, outside of religion of course. It is something somewhat unique to Alaskan culture. So, standing there next to the Intihuatana, my date with combat tourism made total sense. They had it right a million years ago.

Maybe my sister and I dodged some tourist traps, and embraced others. Maybe we could have done it another way, and gained even more. All I know is that in the end, I´d repeat that date all over again-the long lines, the annoying cab driver who tried to rip me off of 5 soles, the bad coffee in the morning, the married couple across from me who loved talking about themselves, paying 1 sole to pee in a stinky bathroom when I would have rathered just go outside-and on, and on. The beautiful things like the gracious Peruvians, my sister learning along my side, the weather, seeing physically challenged and elders hiking up the steep stairs too, the many celebrations from groups of tourists of great photos taken, the plant life, the multi-lingual atmosphere, and on, and on. It was all worth it because I got to connect with a culture that do what some of us do today: we celebrate Mother Earth and all she has to offer, whether that is the sun, or the river we got to hike to one day. She is our religion or our way of seeking understanding. I´m pretty sure the Inca couldn´t agree more with that mindset. It was a damn good date.